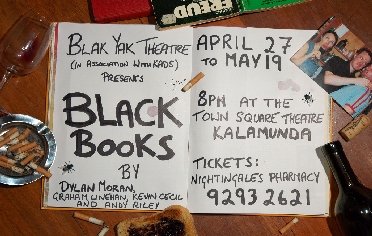 Tickets are now on sale for Blak Yak Theatre’s first production of 2007. We are proud to present the World Premiere of the stage adaptation of Black Books.

Bernard Black would have the perfect life – running his own book shop, “Black Books” – were it not for the nuisance of customers. Continually interrupting his valuable wine-drinking time, Bernard prefers to abuse his customers rather than serve them. Helped (or rather, hindered) by employee Manny and next-door-neighbour Fran, Bernard does his best to avoid the twin evils of sobriety and customer service.

Adapted from the award-winning British sitcom, Black Books will be presented at the Town Square Theatre, Barber St, Kalamunda – in association with KADS. (Please note, this is not the Kalamunda Performing Arts Centre, where Blak Yak has previously held shows.) Performances will be held on April 27, 28, May 2, 4, 5, 9, 11, 12, 16, 18, 19. Fish & Chips are included every Saturday night, where all tickets are $20. On Wednesday and Friday nights, tickets are $15 and $13 concession.

The Town Square Theatre has limited seating and we highly recommend that you book early for what promises to be a very popular production. Ticket bookings are through Nightingales Pharmacy (Kalamunda) on 9293-2621.

We thank our good friends at KADS for assisting us in our first show of the year.

The art of theatre and the theatre of art.

Blak Yak Theatre Inc, having just completed a highly successful season of Dylan Moran’s Black Books, have decided to go in a completely different direction for their next production.

Picasso’s Women, written by Brian McAvera, is not a play in the traditional sense, rather it is a series of monologues from the point of view of the women who loved, and were loved by, Pablo Picasso.

This unique production traces the life of one of the twentieth century’s most revered and influential artists. Beautifully written, Picasso’s Women examines the man though the women. But more importantly, it tells the story of four women who were so very important to Picasso and his work and yet have been largely ignored by history.

The four monologues will be played out over two nights, Fernande Olivier and Eva Gouel on Friday the 8th and Friday the 15th of June, and Marie-Therese Walter and Dora Maar will be on Saturday the 9th and Saturday the 16th of June. The monologues contain adult themes and some will also include nudity.

Picasso’s Women will be presented at the Studio, in the Subiaco Theatre Centre, Hamersley Rd Subiaco. Tickets are $12.95 concession and $14.95 adults, however as the show is being performed over two nights we are pleased to offer a discount for those who wish to come along to both evenings. $20 is all you will pay for two nights of entertainment. The shows start at 8pm each night and bookings can be made through BOCS on 9484 1133.

Blak Yak is proud to have the chance to present this masterful, yet poetic piece of work to the public. Picasso’s Women is a theatrical event designed to
entertain, enlighten, invigorate and excite. It will hopefully leave audiences talking long after the lights have dimmed. 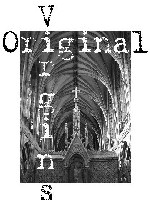 Blak Yak Theatre Inc is very proud to announce its upcoming season of one act plays, entitled Original Virgins, which will feature three locally written productions. Having previously won awards for their original plays Blak Yak is looking forward to presenting the works of this new batch of authors to what will surely be appreciative audiences.

Enmity by Scott North over is a highly charged political thriller which will resonate with audiences in this election year. Enmity is a play about Australian politics, and the short-comings of our democratic system. “I was motivated to write it because of my own passion for politics” says writer Scott North over “ and really just to see if I COULD write a play. What is amazing is the huge amount of support I have received from my peers (and betters) in community theatre.”

Prod and Prejudice is a very adult comedy, written and directed by Stuart Porter. The play focuses on a production company who are making an adult version of Pride and Prejudice when the Jane Austen Historical Society decide to pay a visit. “If you ever want to drive yourself insane write and direct a play. I spent about four hours staring at four lines, trying to figure out how to make them funny and ended up with an Inspector Gadget reference” says Stuart “It‘s interesting when the director in you decides that the writer in you has written something that simply doesn‘t work and you begin to think that the writer is an idiot. You also begin to wonder if you‘ve ever actually been funny in your life.”

Joining Blak Yak in this season is A Lad Insane, performing No Strings Attached, written and directed by company founder Johnny Grim. The play considers the idea of what it would be like to have a long career in a chosen field (or not chosen as the case may be), only to discover that as your career reaches the twilight years, the world has changed and moved on, seemingly without you. No Strings Attached takes us inside the lives of two wooden puppets. ‘Flip’ the older of the two, has enjoyed a long and successful career as a fairground entertainer, his sidekick ‘Scratch,’ has only been part of the show for a few years. We join them as they finish one show, and await the next. When asked “where the idea comes from” he replies “I can’t be specific, but I guess it comes from the fact that I have worked for the one organization for many years, and I sometimes, (more frequently as time passes) have the dreaded nightmare of the customary retirement party, and gold watch. Yeek! It scares the hell out of me”.