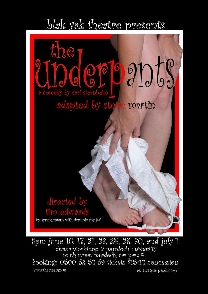 Theo Maske is definitely a man who is going places, he’s a Junior Clerk with the Government, he has a pretty young wife and, once he finds a boarder for his spare room, he’ll have some extra cash to start a family. But all is not well for Theo; see, his wife’s underpants just won’t stay up. Louise Maske, Theo’s wife, finds her underpants have fallen to her ankles during a parade for the King. Was it an accident, or was Louise looking for her 15 minutes of fame? Add two young potential boarders who are vying for Theo’s room – or should that be his wife – as well as a nosy upstairs neighbour, and you’ve got a very funny look at the confusion and uproar caused by a simple flash of a lady’s underpants.

Adapted by comic genius Steve Martin from a 1910 German farce, The Underpants is an hilariously politically incorrect commentary on feminism, politics, sexism, and the human race’s fascination with fame.

“We live in a world where Big Brother and other reality TV programs are phenomenally popular and we are constantly being inundated by these minor celebrities. The Underpants deals with the idea of fame and its transient nature,” says director Tim Edwards.

The Underpants is a change of direction for Blak Yak Theatre, perhaps best known for their original stage adaptations of well known movies, such as The Last Supper and Dead Poets Society, as well as popular television shows like Red Dwarf, Frontline and Men Behaving Badly. However, this innovative company is pleased to have the opportunity to be the first to present this very funny, very clever play.

The Underpants
By Steve Martin