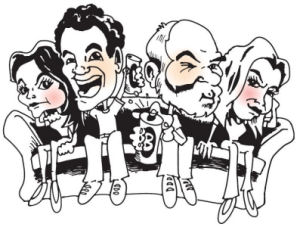 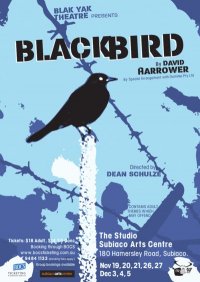 Blackbird is a 2005 one-act (90 minute) play by Scottish playwright David Harrower. It depicts the meeting between a young woman and a middle-aged man with whom, fifteen years earlier, at the age of 12, she had had a sexual relationship.

He has managed to establish a reasonably successful new life under another name, but Una recognized him in a photograph and tracked him down. But why has she suddenly appeared after all this time? What does she want from him?

MOST people would be familiar with the 1996 film Trainspotting  – and Blak Yak Theatre is bringing the stage version to Subiaco this September.

Both based on the novel by Irvine Welsh, it’s a broody yet humorous tale of a group of heroin addicts in Edinburgh and how the drug culture takes over their lives.

Director Dannielle Ashton said she chose to bring Trainspotting to life as a piece of theatre because of the many issues it deals with, not normally experienced by people in everyday life.

“The play is a mix of hilarious and tender moments,” she said. “The script is cleverly written to take the audience on a journey of laughs, as well as tears.

“The cast are extremely talented and portray several characters of diversity, which will leave the audience hating and loving them at the same time.”

Her production of The Sum of Us at the Old Mill Theatre earned her a best director nomination at the 2008 Finley Awards and was also named runner-up best play of the year.

Also joining Trainspotting on the 10, 11 September will be Arena Arts Entertainment’s Unattainable, written and directed by Jess Messenger. 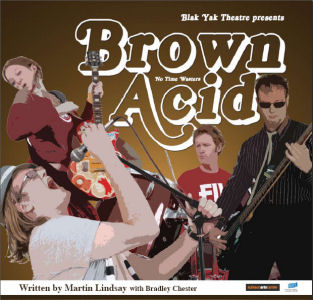 When band’s post audition notices, there is generally a note saying “No Time Wasters”, so what would happen if those time wasters were to start a band of their own?